Historian of the profession and of the profession’s arguments, influential commentator and spirited critic of the educational practices that havedefined literature and composition classrooms, forceful advocate for the profession in the public sphere—Gerald Graff stands as the profession’s indomitable and indispensable Arguer-in-Chief. In his books Literature against Itself, Professing Literature, Beyond the Culture Wars, and Clueless in Academe, Graff invites all parties—students, teachers, scholars, citizens—to gather where the intellectual action is, to join the fray of arguments that connect books to life and give studies in the humanities educational force.

Chicago born and educated in Chicago’s public schools and at the University of Chicago and Stanford University, he became John C. Shaffer Professor of English and Humanities and chair of the English department at Northwestern University, then George M. Pullman Distinguished Service Professor of English and Education at the University of Chicago, then associate dean and professor of English and education at the University of Illinois, Chicago. A founder of Teachers for a Democratic Culture, a president of the Modern Language Association, a presence in Chicago-area high schools, a speaker at over two hundred colleges and universities, Graff has taken our profession to task for the gap between academic culture and the students and citizens of our nation. Critic from the City of the Big Shoulders, he has argued compellingly that the strength of our profession resides in the plurality of its voices and the potential of its classrooms to reveal sprawling, brawling democratic vistas.

Graff’s major influence on education, particularly on the classroom practice of teachers, is reflected today in the Common Core State Standards for K-12 schools:

the Standards put particular emphasis on students’ ability to write sound arguments on substantive topics and issues, as this ability is critical to college and career       readiness. English and education professor Gerald Graff writes that “argument literacy” is fundamental to being educated. The university is largely an “argument culture,” Graff contends; therefore, K–12 schools should “teach the conflicts” so that students are adept at understanding and engaging in argument (both oral and written) when they enter college. . . .            —Appendix, “The Special Place of Argument in the Standards”

Graff’s argument that schools and colleges should respond to curricular and cultural conflicts by “teaching the conflicts” themselves is developed in such books as Professing Literature (1987; reprinted in a 20th Anniversary edition in 2007), which is widely regarded as a definitive history, and Beyond the Culture Wars (1992).   His idea also inspired a series of “Critical Controversies” textbooks which Graff co-edited with James Phelan.

In Clueless in Academe (2003) Graff analyzed (in the book’s subtitle) “how schooling obscures the life of the mind,” and argued that schools and colleges need to demystify academic intellectual culture for all students, not just the high achieving few.  This book led Graff and his wife Cathy Birkenstein to publish a writing textbook, They Say/I Say: The Moves That Matter in Academic Writing (2006), which continues to set records for adoptions by colleges and high schools.  Graff (and now Graff and Birkenstein) has given hundreds of invited lectures and workshops, and his work has been the topic of three special sessions at MLA conferences and part of a special issue of the journal Pedagogy.  Graff served as the President of MLA in 2008.

THE BOOK THAT’S TAUGHT OVER A MILLION STUDENTS TO WRITE 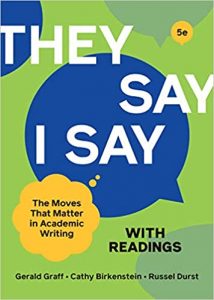